With a new sonic masterpiece of an album up his sleeves, the global Britpop favorite artist, Louis Tomlinson, is ready to share newfound hope, sound, and embrace is artistry in his new record "Faith in the Future". The album features his new singles "Bigger Than Me", "Out of My System", and "Silver Tongues". Fresh from wrapping up his Walls Tour in support of his debut LP, Tomlinson is gearing up to share his new craft live on stage at the Faith in the Future World Tour 2023. The tour takes a stop at Merriweather Post Pavilion on Saturday, 22nd of July 2023. With a big future ahead, join Louis Tomlinson in celebrating this milestone by booking your tickets now! 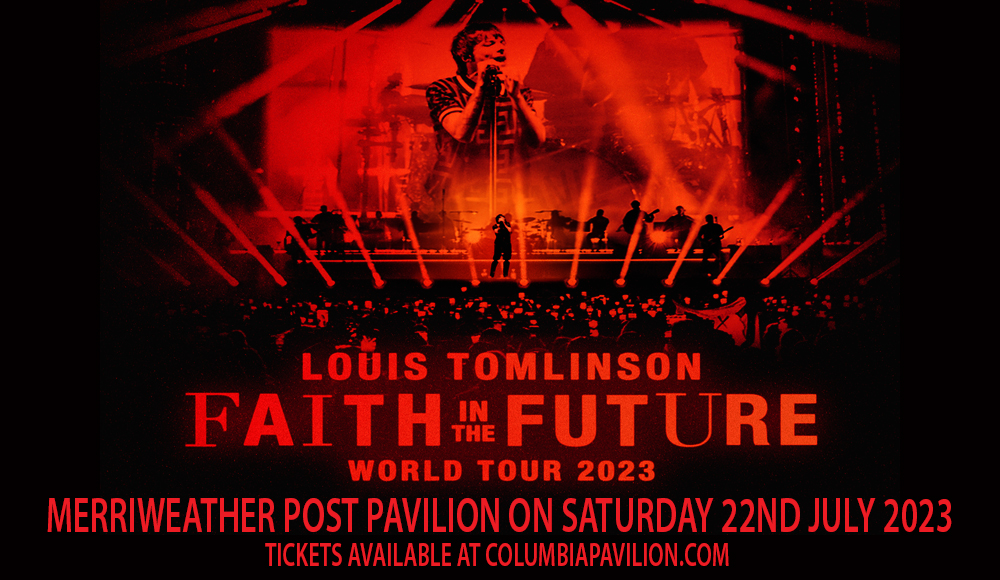 Fresh from the global release of his sophomore full-length album, "Faith in the Future", Louis Tomlinson is gearing up to celebrate his new record on a big world tour at the Faith In The Future World Tour 2023. "Really really excited to finally announce the North America tour," he shared on Twitter. "These songs were created for these moments and I can’t wait to share them with you!"

In an exploratory and dynamic masterpiece of an album, Tomlinson takes pride in finding his sound and embracing his artistry fueled by his passion and newfound hope in making it big as an artist. "I’m just in a more confident place, so I’m willing to be braver and do things like that. Or at least what feels braver to me." he shared with Rolling Stone.

As an emotional new record, the album features his new singles "Bigger Than Me", "Out of My System", and "Silver Tongues", featuring pop-punk and rock anthems, exuding his mission of creating music that comes from the heart.

"I just wanted to embrace what I love musically," Tomlinson tells Rolling Stone in an interview. "There’s a different kind of love for every song. It’s not all trying to be a single."

Louis Tomlinson also shares that his newest single "Silver Tongues" is the track that he's most proud of making. Having previously struggled to find his sound and catch up with his former co-One Direction members' solo careers, Louis Tomlinson is proud to to have grown beyond these worries and fully embrace who he is musically.

"It’s really important to me in the live show, but also in how the tracks are produced as well," he shared in an interview with SiriusXM. "Me and the producers were a little braver on this record."

Wrapping up the year with intimate shows in New York and London, Tomlinson shares with Alternative Press, "I know every artist says this, but I’ve got a deep fucking connection with my fans,"

"I would not be able to make this record without all of your support. I stand upon this stage and think of what’s to come and feel really fucking confident and really fucking proud, and that’s all thanks to you." he added.

Motivated by every crowd at every show that makes him see how big the world is beyond his humanity, Louis Tomlinson is gearing up for new beginnings driven by newfound hope at the Faith In The Future World Tour 2023.